Events throughout the world will celebrate, educate and inspire the general public and children about Space and its benefits to humankind during World Space Week this year.  Please find a few key events highlighted below.  You can also view the detailed event calendar. 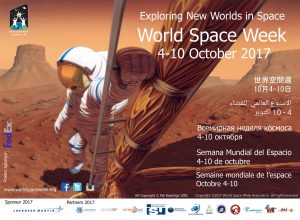 Be part of the World Space Week family, celebrate WSW2018!