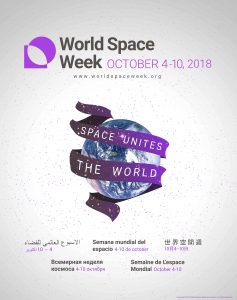 UN-declared World Space Week, October 4-10 annually, is celebrated by thousands of organizations.  World Space Week 2017 had over 3,700 reported events in 80 nations according to WSWA.

The 2018 poster depicts the theme “Space Unites the World.”  The theme is chosen by the WSWA Board of Directors, chaired by Dr. Francisco Javier Mendieta, Director General of the Mexican Space Agency.

This year’s theme recognizes UNISPACE + 50, a United Nations conference of world space leaders to be held next month in Vienna, according to WSWA.  The UN General Assembly declared World Space Week in 1999 as an annual international celebration about space.

The 2018 poster was designed by student Hannah Halcro, selected in a global poster contest by the WSWA Board, said Association President Dennis Stone. Hannah is an undergraduate aerospace engineering student at Concordia University in Montreal, Canada, and is active in the student group Space Concordia.

“I first got involved with World Space Week in 2017 when students put together the first Montreal Space Symposium, a two-day public event the goal of making space accessible to everyone,” Hannah said.  “I enjoy balancing the art and technical aspects of engineering, ” she said.

The Association will distribute the poster in print and electronically in June to World Space Week coordinators and participants in preparation for October 4-10’s global festivities.