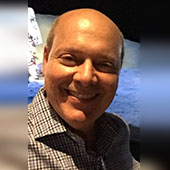 Dennis Stone is Volunteer President of the World Space Week Association. He co-founded and led the organization, originally named Spaceweek National Headquarters, in 1982 when it coordinated Spaceweek in July in up to 15 nations. After the UN’s declaration of World Space Week (WSW) in 1999, the organization became WSW global coordinator.  Under his leadership, WSW grew into largest space event in the world with over 3,700 events in 80 nations.  Today, as its chief executive, he manages the Association’s professional staff and officers and chairs its executive committee.

In parallel, Mr. Stone has had a profession space career of 40 years in engineering, management, commercialization, and international relations.  At NASA today he is Project Executive of the Commercial Space Capabilities Office which provides NASA expertise to the commercial space industry.  He helped manage NASA’s Commercial Orbital Transportation Services (COTS) program, which invested in capabilities of SpaceX and Orbital Sciences to deliver cargo to the International Space Station (ISS).  Prior to COTS, Mr. Stone had two decades of ISS program management and system engineering experience, including Chief System Engineer of the Assured Crew Return Vehicle, Manager of Avionics Integration, Risk Management Lead, and Commercialization Chair.  He began his aerospace career at McDonnell Douglas designing software for the commercial Payload Assist Module, and then worked at Ford Aerospace and Rockwell International before joining the NASA Johnson Space Center in 1985.

Mr. Stone also services as CEO of Ion Biotechnology which is developing a novel cancer therapeutic technology based on ionic metal compounds.

He earned two Bachelor of Science degrees, in Physics and Electrical Engineering, from the University of Hawaii.  He is an Associate Fellow of the AIAA.